What would happen to Bay Area home prices if a recession 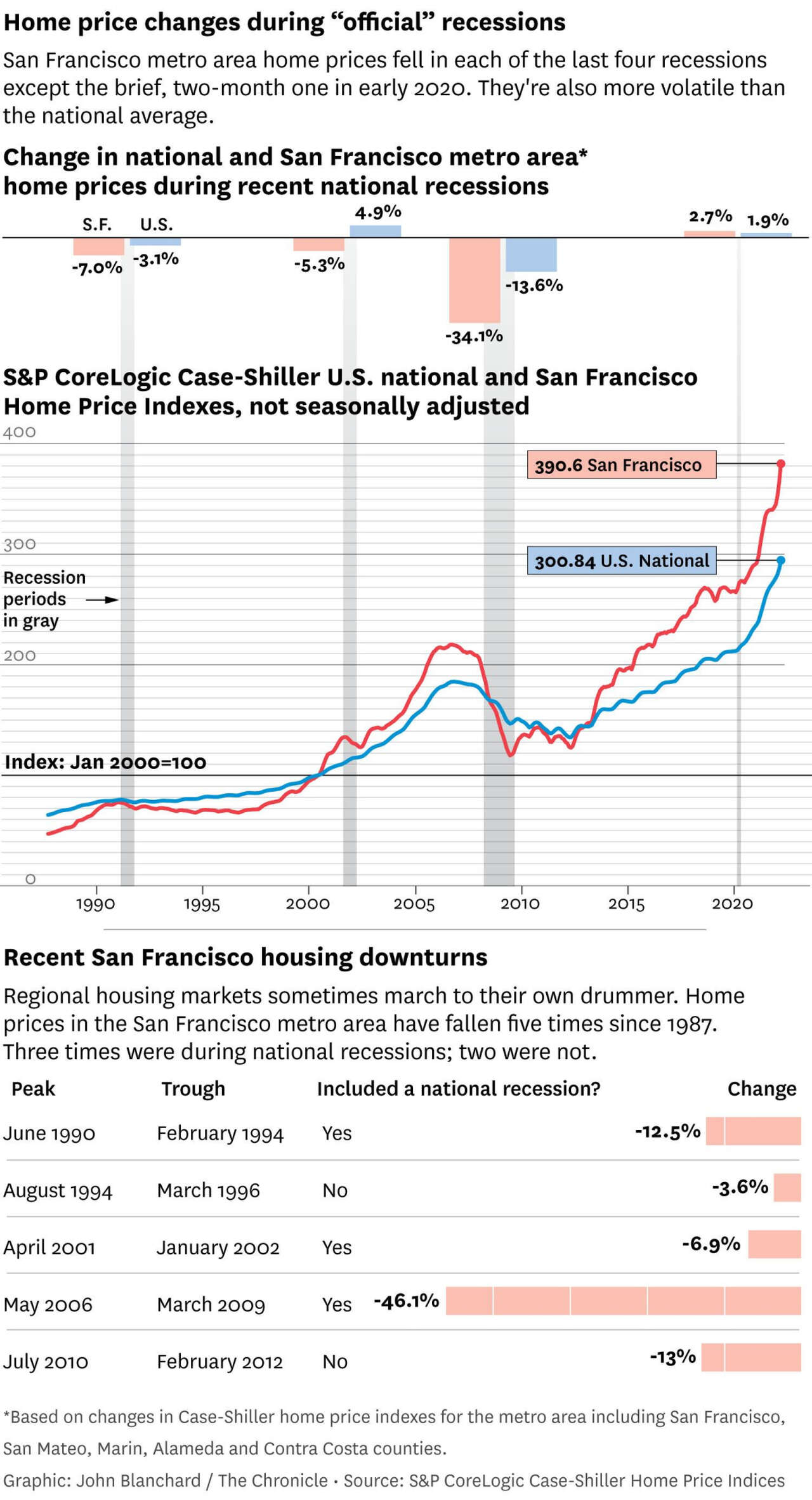 If you’ve lived in the Bay Area long enough, you’ve probably heard someone say that homes here are a great investment because prices never go down.

I thought I’d never hear the second part of that statement again after Bay Area home prices fell by more than a third during the 2007-09 Great Recession, but a real estate agent told me that just a few weeks ago. Patrick Carlisle, chief market analyst for the Compass real estate brokerage, said he still hears it a lot too.

For those who never bought a home near the peak of a housing market, or tried to sell one during a trough, it may seem as though prices never fall, because over the long term they tend to go up, at least as fast as inflation.

Since 2000, Bay Area home prices — as measured by the S&P CoreLogic Case-Shiller home-price index for the five-county San Francisco metro area — have outstripped both inflation and home prices nationwide, by a significant margin.

But since its inception in 1987, this index has fallen five times — three times during the previous four recessions and twice outside of recessions. It rose slightly during the latest recession, which lasted only two months in early 2020.

Bay Area home prices are also more volatile than the national average. They typically rise faster during boom times and fall further during recessions, mainly because the region is tied to the boom-bust tech sector and has “a relatively tight supply” of homes, said Craig Lazzara, managing director with S&P Dow Jones Indices.

As recession fears heat up, so do questions about what could happen to Bay Area home prices if we enter one.

Although prices typically fall during recessions, each one is different and “hits local economies completely differently,” said Christopher Thornberg, director of UC Riverside’s Center for Economic Forecasting. You can also have “regional catastrophes,” such as the oil price collapse that tanked Texas home prices for much of the 1980s.

In the early 1990s, while the nation experienced a mild recession, California endured a major one. Southern California was slammed by shutdowns of military bases and aerospace plants. That followed a period of overbuilding “that led to restrictions that now prevent us from building enough houses,” Thornberg said.

San Francisco metro home prices fell 12.5% between June 1990 and February 1994. The dot-com boom of the late 1990s revived the Bay Area economy, and by mid-1997, prices had surpassed their previous peak.

Although regional downturns are common, before the Great Recession, there was a widespread belief that prices nationally had never fallen on an annual basis since the Great Depression.

Two national home-price indexes — compiled since 1950 by Freddie Mac and since 1975 by Freddie’s federal regulator — had never declined over a full year, the New York Times reported in August 2007.

The idea that home prices never fall helped fuel the speculative excesses that led to the mid-2000s housing bubble, the financial crisis of 2007-08 and the worst recession since the 1930s.

Before the Great Recession, Bay Area home prices typically rose quickly during an expansion and stopped climbing when a recession hit. “Then you usually have a flat period, then a decline in the 5 to 10% range,” Carlisle said.

Here’s why: When the Fed raises interest rates to cool inflation, buyers back off. As prices fall, homeowners who don’t have to sell take their homes off the market. “Sales volume drops dramatically, but prices move ever so slowly,” said Edward Leamer, an economist with the UCLA Anderson Forecast.

The 2008 collapse “was an anomaly,” Carlisle said. “The 2005-2007 bubble was fueled by home buying and refinancing with unaffordable amounts of debt on a staggering level, promoted by predatory lending practices, promises of endless appreciation, and an abysmal decline in underwriting standards — and then eagerly facilitated by smug, rapacious, Wall Street flimflammery and self-abasing credit ratings agencies,” he wrote in a report last year. “Millions came to own homes they could never afford to pay for and the rot was distributed throughout the financial system.”

When the Fed raised interest rates and prices came down, people who bought homes with little or no money down and adjustable-rate mortgages owed more than their homes were worth and stopped making payments.

Banks ended up with the homes, but “they couldn’t hold onto them like homeowners could,” Leamer said. They dumped them at fire-sale prices, prices spiraled downward, financial institutions failed and a painful recession ensued.

The “official” recession lasted from December 2007 to June 2009. The Case-Shiller San Francisco home price index fell 34% during this period (more than twice the national average) but measured from peak to trough, it plunged 46%. It didn’t surpass its previous peak for almost a decade. (The index tracks repeat sales of existing, single-family homes in San Francisco, San Mateo, Marin, Alameda and Contra Costa counties.)

Although some parts of the Bay Area were hit harder than others, the mayhem was so widespread that hundreds of thousands of property owners who bought near the peak received temporary property-tax reductions without even asking.

In California, property is generally assessed at market value when it changes hands. In between sales, the assessment for property taxes can’t go up by more than 2% a year, plus the value of major improvements. However, if a property’s market value drops below its assessed value, under Proposition 8, property owners can ask to have their property tax assessment temporarily reduced to current market value. This generally happens when people buy near a peak or grossly overpay for a home.

During the Great Recession, county assessors proactively reduced tax assessments on many homes purchased near the peak. As prices recovered, they restored these assessments to where they would have been without the temporary reduction.

The counties with the largest percentage of Prop. 8 reductions, relative to their populations, were Contra Costa and Solano.

“If there was a subdivision with 1,000 homes, we would give out 998” temporary reductions, said Contra Costa County Assessor Gus Kramer.

High-end homes were the last to lose value and the first to recover. If there’s another recession, “I would predict it would be the same scenario,” Kramer said. “People who live in very large expensive homes have planned their economic life better.”

After the financial crisis, the government clamped down on predatory lending and the Fed took unprecedented steps to drive down interest rates and boost the economy. Homeowners took out or refinanced mortgages at record low rates and home prices soared, especially after the pandemic hit.

“The pandemic brought forward a lot of demand,” Lazzara said. “I know some young families that would have moved to the suburbs in 2022-23.” When cities shut down and remote work became possible, “They said, ‘Why don’t we go now?’”

If we do head into recession, a housing crisis akin to the last one is unlikely.

Unemployment is extremely low, and most homeowners have fixed-rate mortgages at ultra-low rates. Moreover, they are sitting on record amounts of home equity, reducing the risk of foreclosures.

That doesn’t mean today’s nosebleed prices won’t come down. In April, Case-Shiller’s San Francisco index was up 23% year over year, but 11 of the 20 largest markets had even bigger gains, up to 35.8% for Tampa.

Its 20-city composite home price index rose 21.1%, putting it in the 99th percentile of year-over-year gains. As the late economist Herb Stein used to say, “If something can’t last forever, it won’t,” Lazzara quipped.

Demand for Bay Area homes has already weakened. There are fewer offers, more price reductions, homes are taking longer to sell, and there are more of them on the market. Mortgage rates are rising at their fastest pace in decades.

Yet the supply remains constrained, and there are many high-income families in the area.

“My guess is we have seen the peak of one of the longest, most dramatic cycles in history,” Carlisle said. As of June, median year-over-year appreciation rates are dropping fast in virtually all Bay Area markets. “That doesn’t mean we are in for a crash; we are in for some sort of normalization,” he added.

Mark Zandi, chief economist for Moody’s Analytics, sees prices falling 5% to 10% on a national basis. “Some of the most juiced-up markets in the Mountain West and South will see double digit declines. The Bay Area, I think, basically goes flat, although some communities will see declines,” he said.

In addition to perennial issues such as water, earthquakes and fires, climate risk is becoming a real concern for California, Zandi added. And for the state’s big urban areas like San Francisco and Los Angeles, so is remote work.

Thornberg, however, does not expect a recession in the next 12 months nor a drop in home prices.

“Home prices historically have fallen only when there is an economic calamity in the housing market,” he said. “Today we have record equity levels, low (homeowner) debt-to-equity, a low supply of housing, low debt burdens and great credit quality. This is not a market that is about to get hit by a calamity.”

Kathleen Pender is a freelance writer and former columnist for The San Francisco Chronicle. Twitter: @KathPender

More: What is a recession, and are we in one yet?