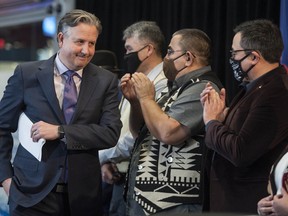 A potential Vancouver bid for the 2030 Winter Olympics may be dead unless the Canadian Olympic Committee’s feasibility team can convince city councillors otherwise during a meeting scheduled for Wednesday.

It’s all because of a city staff report prepared for the policy and strategic priorities committee.

The most damning line may be this one: “It is the view of staff that the proposed timeline to submit a bid as currently constituted is not achievable.”

Or it might be this one: “Because the eventual funding and indemnification model for the 2030 Winter Games has not yet been determined, staff cannot at the time of this report provide Council with even an order-of-magnitude estimate of the financial implications of hosting the Games.”

But those are far from the only ones in a searing 46-page report that describes a shambolic process long on enthusiasm and a proposal critically lacking the most essential details.

The dream that the Canadian Olympic Committee hopes to put before the International Olympic Committee in November is of an Indigenous-led Games that will further the national, provincial and municipal project of reconciliation with First Nations.

But if Mayor Kennedy Stewart and council accept the city manager’s advice not to endorse the proposal by the August deadline set by the feasibility team, the $4-billion “reconciliation” bid can’t go ahead.

Why? Because one of the hallmarks of the Indigenous-led Leadership Assembly for the bid is that if one partner is out, they’re all out.

In a statement, feasibility team spokesperson Chris Dornan said the team believes it is possible to provide all the necessary information to the four host First Nations, Vancouver and Whistler so that they make informed decisions to endorse the proposal and meet the deadlines set by the International Olympic Committee.

But for council, it’s a gamble. If it endorses the bid without all of the report’s questions answered so that the feasibility team can begin a “targeted dialogue” with the IOC in October, voters might punish them at the polls on Oct. 15.

Then, there’s also the possibility that a newly elected council — which won’t be sworn in until November — might want to overturn the endorsement, or at very least take time to study it, which puts the deadline for getting the final proposal to the IOC at risk.

And without the endorsement of all of the members of the Leadership Assembly, the province won’t agree to any funding. And without federal and provincial funding, the report says the city would have “potentially unlimited financial risk.”

The report notes that the Olympics comes on the heels of five World Cup soccer matches in 2026 estimated to cost $290 million (including the city’s commitment to run a 34-day festival to celebrate), the 2025 Invictus Games that B.C. and Canada have committed $30 million to, and whatever costs might be associated with Vancouver hosting the 2023 Laver Cup tennis tournament.

And the report’s list of what’s not known is long.

There’s no indication of what benefits Vancouver and B.C. taxpayers — staggered by the COVID-19 pandemic, a housing crisis, rising inflation and an epidemic of opioid overdose deaths — would get from the Olympics.

Vancouver’s main potential benefit is 2,300 units of affordable housing from the athletes’ village that’s proposed for land owned by MST Development Corp., a joint venture of the Squamish, Musqueam and Tsleil-Waututh First Nations.

There’s no agreed-upon governance structure setting out how decisions will be made by the multi-party group that includes: the four First Nations, Vancouver and Whistler. The four host First Nations have also made it clear that Sun Peaks would have to be dropped from the plan if the First Nations on whose unceded territory Sun Peaks is located don’t grant permission for the site to be used.

There’s no operational plan and no indication of how much the city would need to spend on essential services including police, fire and other emergency services, transit and transportation, waste management, snow removal and bylaw enforcement.

There is no costing or indication of who would pay to get the city-owned PNE amphitheatre, Agrodome and Hastings Park Games-ready.

There’s no estimate of how much additional staff time would be required to negotiate all of those legal agreements, let alone figure out the financial costs by February 2023 which is when the final plan needs to be submitted to the IOC.

Finally, the report notes city staff is overwhelmed with complicated files related to the overlapping crises of COVID-19, housing, overdoses and massive rezonings, plus the demands of an unfocused, undisciplined council whose members — in addition to council resolutions — have passed more than 270 individual motions in the last four years that have required staff responses.

Since then, Vancouver has imposed a cone of silence despite council’s initial request in November 2020 that staff pull together enough information to “enable members of the public to register to speak to council by the first quarter of 2021.”

Council asked for a “critical cost-benefit analysis of the 2010 Olympics and specifically any evidenced or assumed impacts on housing, affordability, environment and climate” in March 2021. It was never made public until being appended to this new report.

The mayor firmly quashed the suggestion of a plebiscite earlier this year by falsely claiming that a vote violated the MOU that set up the Leadership Assembly — an agreement council endorsed during a November in-camera meeting.

But the unelected and unaccountable COC isn’t blameless.

As laudatory as the vision for an “Indigenous-led,” “reconciliation” Games is, it only occurred to the COC last summer. Only then were the four host First Nations approached to lead the bid.

And it was only this past March when the COC’s technical team decided on Sun Peaks over Cypress Mountain as a venue that the First Nations in that region were contacted.

More news, fewer ads: Our in-depth journalism is possible thanks to the support of our subscribers. For just $3.50 per week, you can get unlimited, ad-lite access to The Vancouver Sun, The Province, National Post and 13 other Canadian news sites. Support us by subscribing today: The Vancouver Sun | The Province.

Sign up to receive daily headline news from The Province, a division of Postmedia Network Inc.

The next issue of The Province Headline News will soon be in your inbox.