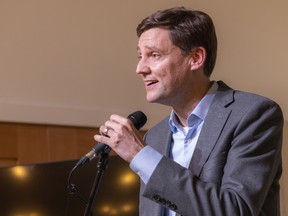 VICTORIA — David Eby launched his campaign for the NDP leadership this week with an ambitious promise to build government-funded housing for the middle class, owing to a market failure by the private sector.

“We can build attainable housing on public land for the middle class,” Eby told supporters at a gathering in his Vancouver–Point Grey riding Tuesday evening

Eby acknowledged that his proposal would be a major one for this or any other B.C. government.

“Building public housing on public land for middle-class families was never something government needed to do when I was growing up — generally, the private sector looked after it.”

But he said it was in keeping with NDP history and principles to step in where the private sector fails to deliver.

“The NDP has never shied away from delivering a public response to a struggling private market, whether it is health care, pharmacare, child care and even insurance,” he reminded the crowd. “We can’t give up on those successful responses now when it comes to housing.”

Eby resigned as housing minister and attorney general on Wednesday, under the rule laid down by Premier John Horgan for ministers seeking the party leadership.

He provided a few details of his plan for government-backed middle-class housing in his speech and subsequent interviews.

He also pledged that the government-sponsored middle-class housing would be privatization-proof: “We can structure it so if government ever changes hands, the new government can’t sell it to pretend the budget is balanced.”

He signalled, too, that the projects would be spread around the province.

As housing minister, he’s pressured local governments to expedite approvals, praising those that go along, criticizing those that don’t.

He offered no apologies for doing the job of housing minister as he sees it: “Sometimes that means saying things that are true — that local governments have to approve more housing; they have to be faster.”

At the same time, he conceded the province has to be willing to address the legitimate concerns of hesitant municipalities.

“Without question, we have to deliver more housing,” Eby told DeRosa.

Those rewards could include community centres, swimming pools, trails and the like.

The promise of rewards was crafted to reassure municipalities fearing that Eby’s housing push was all stick, no carrot.

Yet he didn’t rule out provincial legislation to override holdout municipalities where affordable or rental housing is at stake.

“I hope we don’t have to do that,” he told the CBC’s Stephen Quinn.

“I hope that by addressing their concerns around growth and how we make it livable, we’ll be able to work together.

“But at the end of the day, we need this housing built right across the province.”

There’s still a lot to be determined about Eby’s plan to develop publicly funded housing for the middle class.

One question involves B.C. Housing, the troubled agency that currently oversees the government’s multi-billion-dollar commitment to low income and other kinds of social housing.

“There’s some really serious recommendations in that report,” Eby acknowledged in the CBC interview.

He described bringing in current and former senior public servants and a former deputy auditor general “ to really make sure that this happens quickly.”

B.C. Housing has “grown dramatically” under the NDP, making it “one of the biggest developers in North America and certainly in Canada,” he says.

Given the failings documented in the Ernst & Young report, this is hardly the time to undertake another ambitious expansion, particularly in an area where, by Eby’s own admission, government has not ventured before.

He said nothing about costs or financing for his proposal.

I’m told that it could cost in the range of $500,000 to $750,000 per unit to construct housing for middle-class families in Metro Vancouver.

For 10,000 units — which would barely dent the need in the region — figure half to three quarters of a billion dollars.

Or the challenge of lining up workers and materials in the overbooked construction sector.

“Delivering results is really important to me,” Eby said this week.

It remains to be seen how many of his proposed middle class housing units will be underway by the next election.

Sign up to receive daily headline news from the Vancouver Sun, a division of Postmedia Network Inc.

The next issue of Vancouver Sun Headline News will soon be in your inbox.